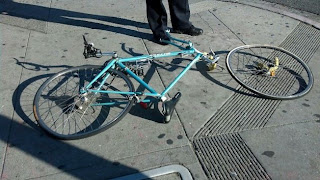 I just spent the morning having my front teeth glued back in my head. Long story, it is fallout from being struck by a car in San Francisco almost 2 years ago. The driver who hit me was definitely running a red light, was probably speeding and I have little doubt was distracted by a phone. When I returned home from the dentist I saw a facebook post about another cyclist death in my city.

So far details are skeletal but, on Folsom St., one of the probably 2 busiest cycling commute corridors in SF a 30 year old woman was killed by a right turning driver. In a good sign the police have impounded the vehicle, presumably as evidence.
I am shaken and angry and well, angry.
It is scary to ride a bike in the City, drivers have never been more distracted, texting while driving is ubiquitous.
I want to see change, I want to push communities to push for vulnerable user ordinances, like the one recently adopted in Sebastapol CA.


I may try to organize a vigil tonight but I have never done that before so, we'll see.

CYCLIST ARE TIRED OF DYING FOR YOUR RIGHT TO DRIVE BADLY

Street theater? That can be great but also awful.

What would I accomplish? Simply acknowledging the fact of an unfair loss of life, of someone who was trying to make a positive contribution, killed by a poor road design? distracted driving?