Following are descriptions and images of the work and opening reception for Centering the Margin at Root Division on 3/10/12. 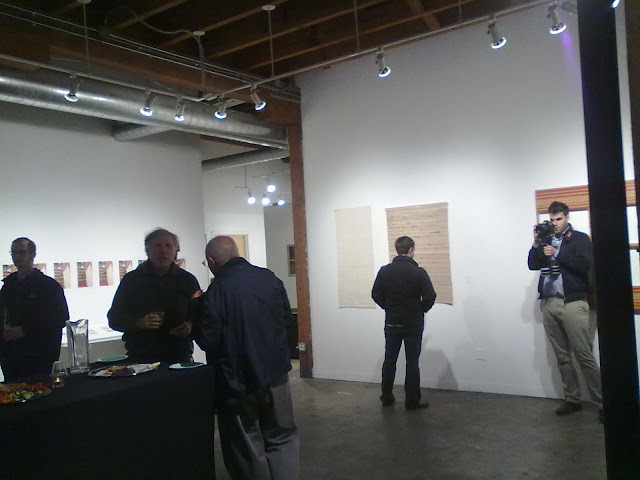 One of my main goals with Centering the Margin as the it evolved, has been to use the concept to draw parallels between works that may seem outwardly very different. When I first proposed this show to Root Division, my initial group of artists; friends, colleagues and Bay Area Artists who’s work I admire, was emphatically visual and almost all 2 dimensional works. With Root Division’s help a call for entries was initiated to which we received over 100 entries. It is perhaps a testament to Root Division’s profile that the process of culling a group of 10 to 11 artists from this pool was excruciating due to the universally high quality of the entrants. This process allowed me to flesh out and expand the concept with a diversity of practice and media in exciting and unexpected ways.

In Gravel Bank and Small Hill, part of her series of photographs named“We are all unique and everything is new.”, Susanna Corcoran makes us alive to physical phenomenon that go unnoticed mainly due to our alienation from the physical landscape. With the humble tools of milk and food coloring, Susanna’s un-manipulated photographs document her interaction with bodies of water, large and small, setting up disorientating juxtapositions of scale with ephemeral gestures redolent of analog film special effects. Their strangely harmonious yet disquieting presence in the landscape is, in the artists words, “intended to at once seduce, disorient, confuse and create a sense of floating, ambiguity and wonder.” 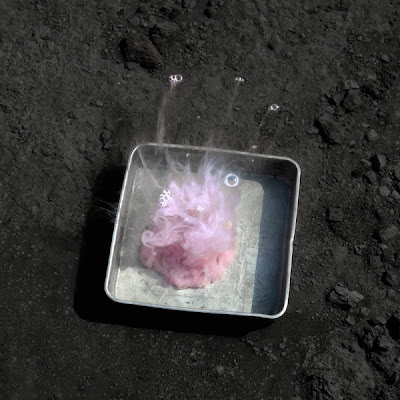 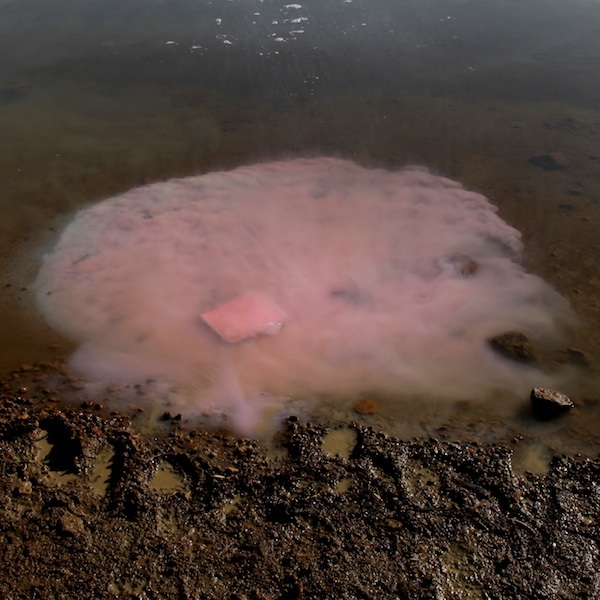 Michael Ryan uses the clear plastic of bubble packaging and plastic water bottles as a medium and subject. His soaring sculpture exalts this materials intended for an ephemeral function, containers meant to shuttle products from display to consumption and in so doing quotes abstract forms that seemed to be  borrowed from modernism. 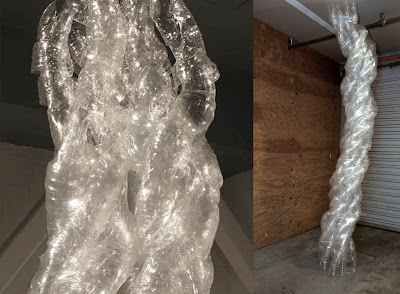 Sarah Newton uses a kind of drawing technique associated with Renaissance drawing (drawing on toned ground with highlights and dark media) and later employed by 19th century American artists to depict a frontier that was transitioning to tourist landscape. Sarah employs this archaic drawing technique to depict the uniform landscaping and architecture of the ultimate interstitial space, the freeway rest stop. Her jarringly sublime depictions of this space is solidly at odds with the travelers experience of these spaces, as a nominal expression of public space but mostly a place for human and dog to address pressing bodily functions. 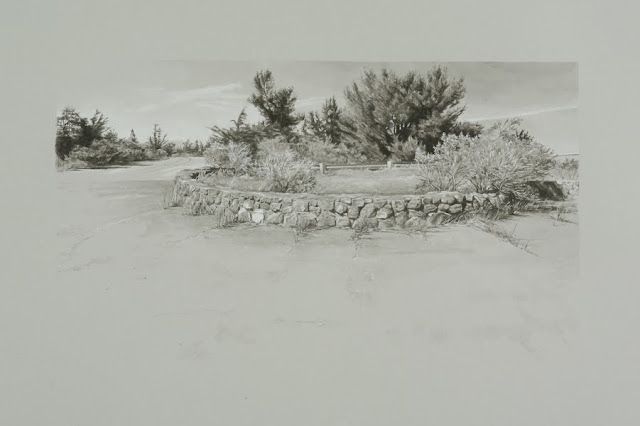 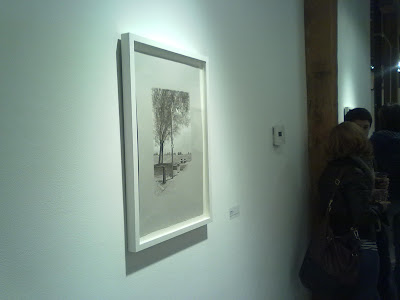 Anna Kell, in her paintings Johnson City Corner Scrap, and Faux Scrap, is acting on her obsession with the ubiquitous urban artifact of the discarded mattress. Our relationship to these objects is infused with our intimate awareness of their tactile properties. It is jarring to see an object that is party to our most private moments (the marriage bed, the death bed) abandoned by the side of the road, abject in its stained and usually damp state. Anna plays a visual sleight of hand with a confusion of trompe l'oeil and collage while playing upon the uncanny similarity between a painting support and a mattress. 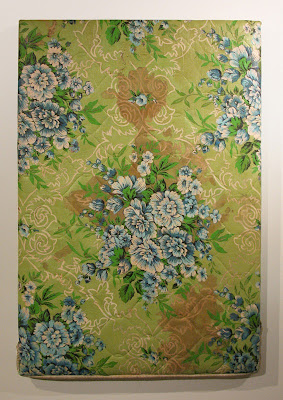 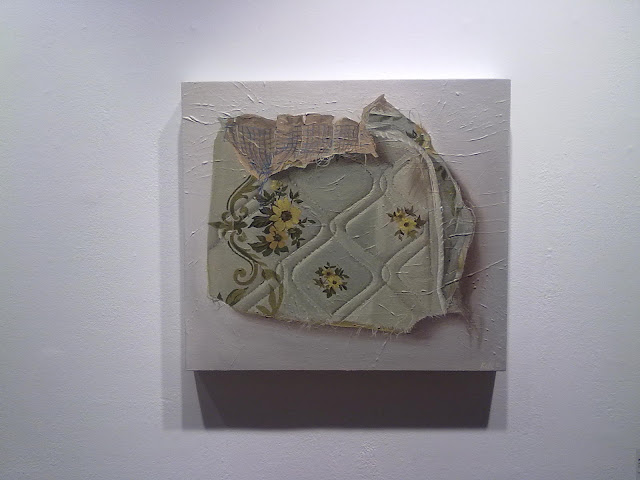 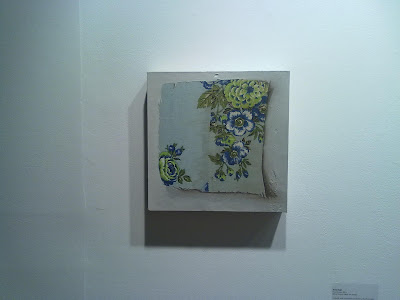 My work included in exhibition recast vestigial artifacts and echoes of the technologies of reproduction, in this case the discarded color calibration squares from the margins of printed collateral and product packaging, as geometric abstraction. These woven paper works derive their structure from the sequence of process and spot colors found on this material, turning this indecipherable code into a visual order that continually falls apart into chaos. 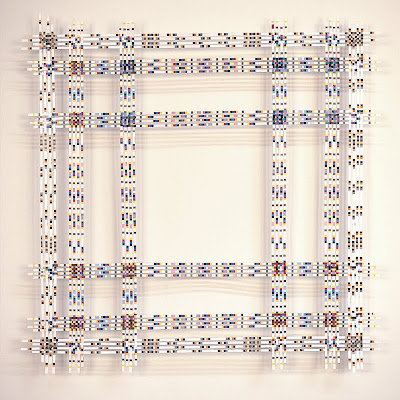 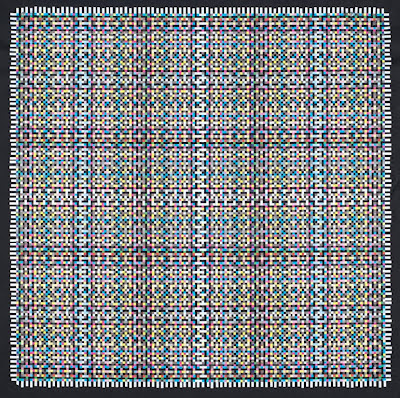 With Centering the Margin Byron Peters takes his project two tears flow quick in succession to its first sanctioned venue. His tiny sculptures imitate a type of animal waste that is a common signal of pest infestation and normally discretely places these sculptures in public, private and commercial spaces such as “The Federal Reserve, SFO, United Airlines, picture frames returned to IKEA and other retailers, California College of the Arts, selected personal homes, and a wide variety of commercial settings”. He documents the reaction to these sculptures in such as increased sanitation and “temporary infrastructures.”, hoping to reach a breaking point in these systems. Although humor is inevitably bound up in this work, Byron’s intent is not pranksterish. He wishes instead to “invert...power relationships” and point up the dissonance between capitalism’s “denial of shit”* and the reality of an economy predicated upon a cycle of endless consumption and waste. 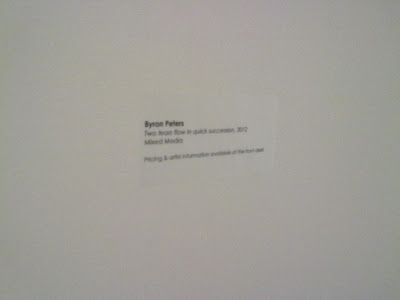 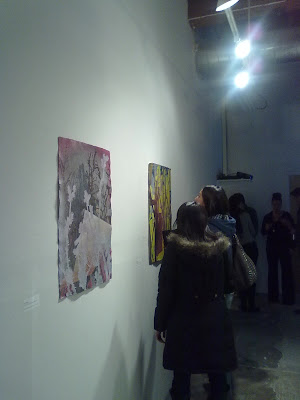 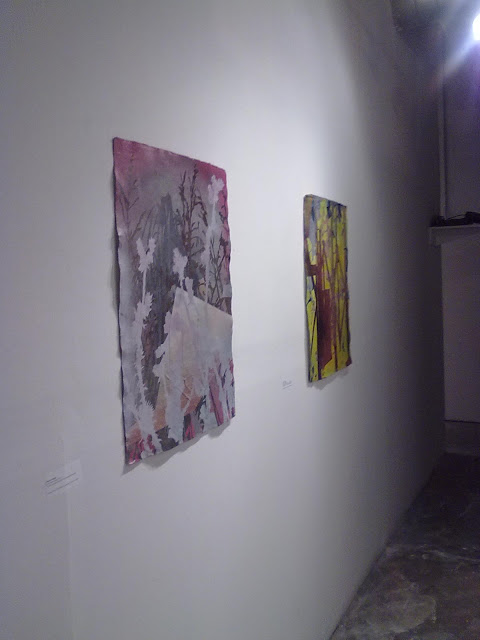 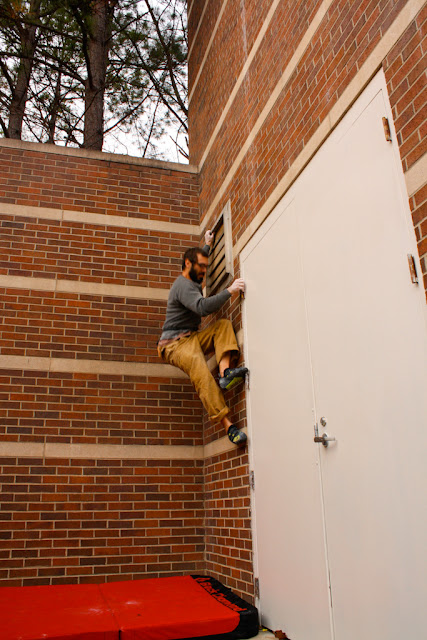 In “Alternate Route Project” Jason Adams navigates peripheral architectural spaces using techniques derived from bouldering, a technical, low altitude permutation of rock climbing. This act and the accompanying manual are intended to activate areas within public spaces (in this case the Clemson University Campus) that are not intended for use. For Jason, these “quiet interventions” are significant for stimulating new dialogs between the architecture and its users, and serve as analogs for the act of stepping outside perceived boundaries and social norms that define the parameters of free speech in the public square. 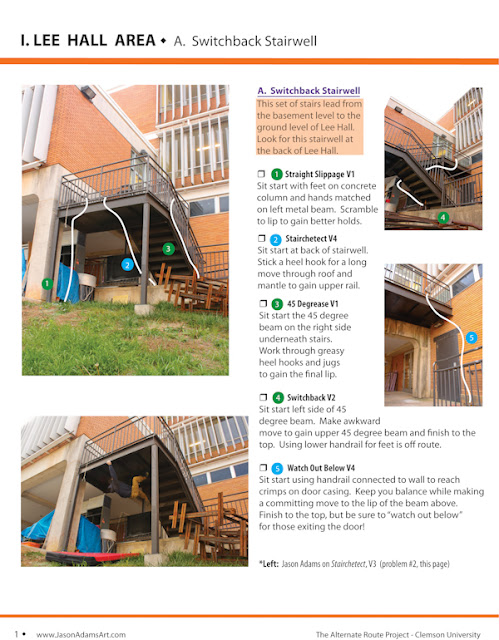 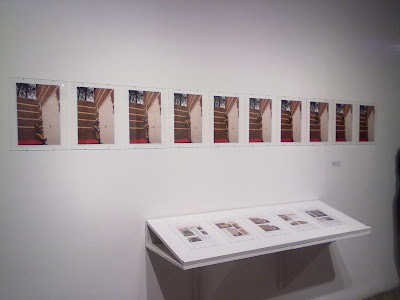 Cara Tomlinson has excerpted her video piece Apophenia for the exhibition.. In this four channel looped video Cara builds structure and rhythm from the seemingly random and chaotic visual and auditory cues of everyday existence. By isolating these rhythms Cara disarms us into a realization of the sensory cacophony we cancel out just to get through our day. The power of this piece is to trigger in us an unavoidable sense of loss at that fact. 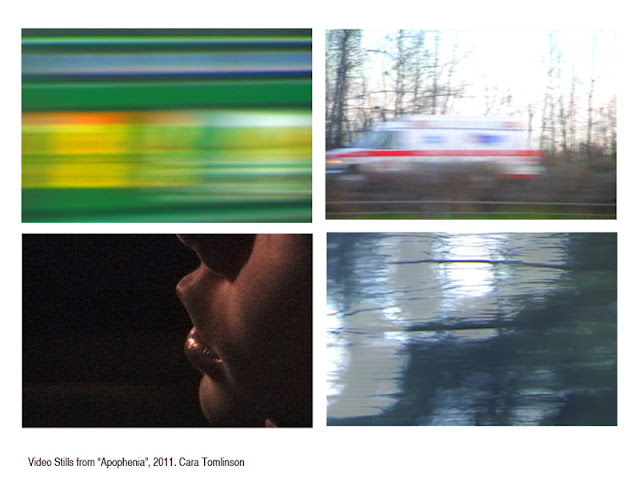 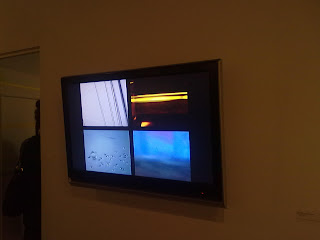 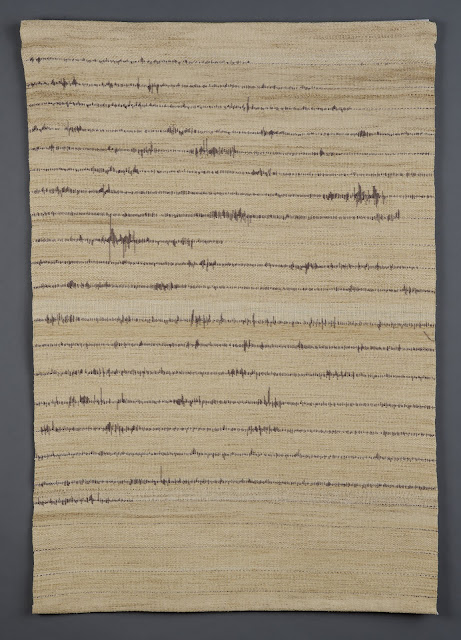 Robin Johnston’s work embodies the concept behind the show through her recording of natural processes that mark the passage of time but slip unnoticed. In “Two Weeks in July” Robin textile the records tidal activity of an eponymous period in 2009 in the Marin Headlands. “Undercurrent” records seismic activity in nearby Sausilito. Robin reifies this obscure data by translating it (in her time at Headlands) on a full sized loom, a task which, as I can attest from first hand experience, when performed within the unfinished walls of the Affiliate studios there, feels like it’s own natural phenomenon. 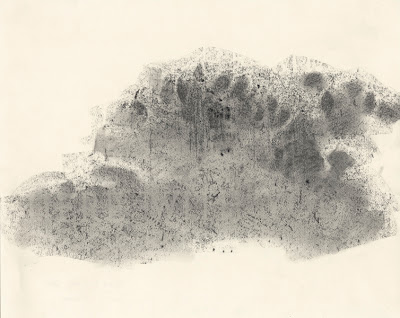 Jenny Salomon finds a way to incorporate physical surfaces from our surroundings directly in her work with her hybrid of rubbing and drawing. Jenny first transports her drawing to the site of her interest: a grave stone, a stucco wall or filigreed fence, and returns to the studio to further work the image in traditional drawing techniques. In so doing, Solomon has found a way to literally bring the world into her studio, or expand her studio to include it.

Brian Caraway, in a work created especially for this exhibition, takes the hidden aspects of his primary medium, painting as subject by reworking a “failed” painting into an exploded view of its support. Brian generously invites the viewer into his process and behind the sacred flat plain of modernist painting, a tradition to which he surely feels a part. 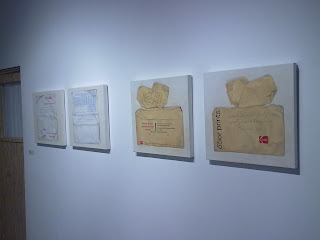 Michael Hall uses the accouterment of film-based photography and specifically the snapshot, a physical artifact that has been ushered out by the digital as subject for his oil paintings. Infused with nostalgia for those of us of a certain age, the envelopes formerly used to contain snap shots recall the built in waiting period and sense of expectancy between the shutter click and a visit to the photo-mat, a period of time obliterated by the digital photograph. 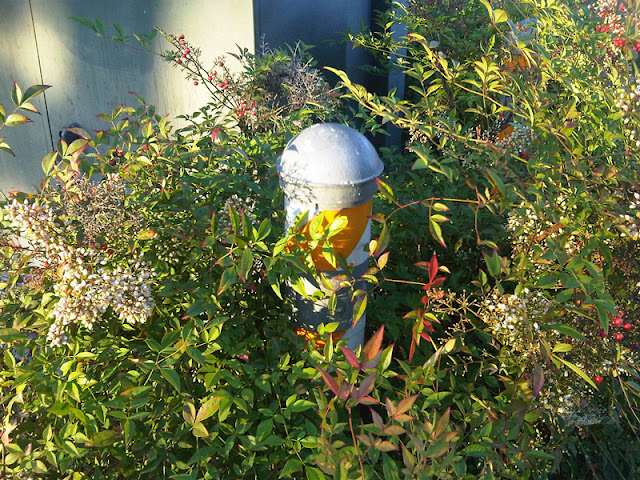 Keith Southern addresses the revolution in photography brought about by the ubiquitous camera phone. This technology has literally made everyone a photographer, even if the images generated never graduate from binary to physical form. Keith uses this truly ephemeral medium to catch fleeting moments of light in extremely banal settings, centering the object of his interest with a minimal amount of intentional framing. In so doing he embraces the unschooled nature of cell phone photography and short-circuits the preciousness of the photographic print. 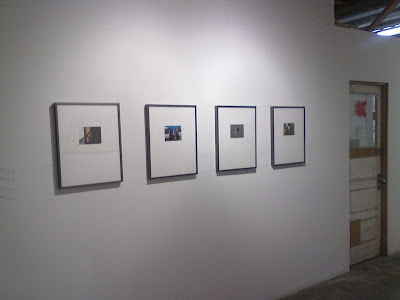 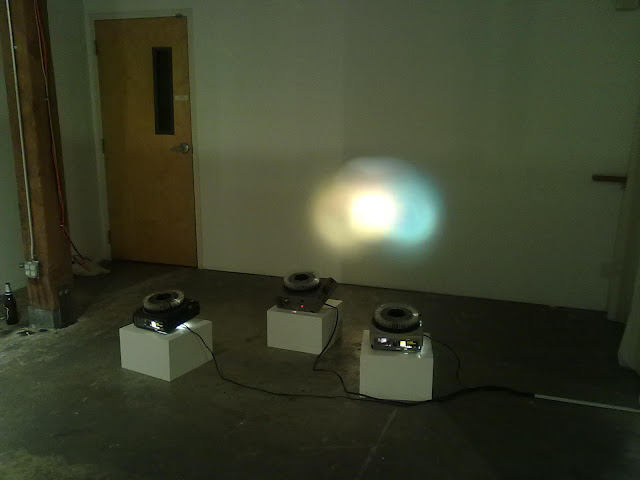 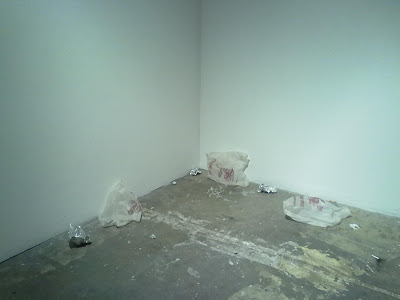 Chris Thorson creates a simulacrum of a space that can be found adjacent to any workplace, AA meeting, art studio or bar; the ad hoc smokers’ lounge. As Chris depicts it, this space is trash strewn and gritty, a physical rebuke to its user, that 21st century social outlier, the smoker. A closer look will reveal that the materials used in Chris’s installation are hand crafted from fine art materials and hand-woven silk. While on one level she is making a sow’s ear from a silk purse, Chris is also acknowledging that one person’s abjection is another person’s respite.

I've been browsing online more than 2 hours today, yet I never found any interesting article like yours. It is pretty worth enough for me. In my view, if all site owners and bloggers made good content as you did, the net will be a lot more useful than ever before.

Obviously, you'll be able to go to sites as You - Tube at which you might locate lots of funny vids. Also, by having a radio internship in your resume, there is a better chance for you to become a DJ when you apply for a job in any radio station in the nation. This not only allows listeners to listen to their favorite MP3 files along with their SIRIUS radio; it also lets them digitally record their favorite radio songs for instant playback.

Here is my page :: More about the author
my webpage: kostenlos spiele spielen